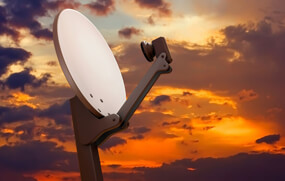 Upgrading the LNB can help you to receive 4K or change to a SWM (Single Wire Multi-switch) setup.

The LNB is mounted pointing back at the satellite dish and collects the weak signals transmitted from satellites via its feed horn. It consists of a low-noise amplifier to boost the signal and a local oscillator which combines with the amplified signal transmitting this stronger signal via coaxial cable to the receiver.

LNB’s don’t go wrong very often, but a lot of common problems stem from being exposed to the elements too long. This casues cracks to appear letting moisture into the unit. Symptoms of a faulty LNB can range from interference and pixilation to complete signal loss (especially in heavy rain) or missing channels.

You can check an LNB in several ways to see if it needs replacing, for safety and to prevent shorting its best to disconnect the receiver unit from mains electricity. Also, disconnect the coax [As the LNB is powered from the receiver via the coax connection]. Assuming you can get up a ladder to access your satellite dish safely, you can start with a visual check.

Before inspecting the LNB its worth testing the sturdiness of the dish mountings and pole. If they move easily, this could be the root of your reception problems.

The LNB is mounted on a protruding arm that sticks out and points back at the dish. It looks cylindrical or horn-shaped. Check the plastic casing for any cracks or other damage. If the housing is damaged, it is most likely that the electronics inside are compromised by water ingress. Over time even small hairline cracks can “suck” water inside the unit via capillary action.

Check that the coax mountings (usually F-Connectors) are secure and that you can’t see any rust or dirt on the connections that may interfere with conductivity. If rusted through, then you will most likely have to replace the unit. If the coax is loose but not rusted, try cleaning and tightening the connections to improve reception.

As your LNB is powered via a DC feed from the receiver, it’s worth noting that the longer the cable length to the LNB, the greater the voltage drop which may be. Source of problems. Also, longer the cable runs mean higher signal attenuation.

RG 6 cables with a solid copper center conductor are recommended due to much lower DC voltage drop properties compared to copper-coated, steel conductors. To avoid the need for additional AC boosters cable runs should ideally be less than 100 feet from receiver to dish. I’ve found that shorter runs also help with fade due to rain / bad weather.

To test the LNB operation, connect a current meter, and check that the LNB is drawing the requisite amount of current and is within normal operating range in mA (milliamps). Carrying out this test can be a bit tricky up a ladder, especially as you’ll need to test the current in series. You may need to create a jumper cable to allow this.

If you can obtain a satellite signal strength meter, you can try removing the existing coax connections to the LNB. Unscrew the signal output jack and connect a jumper cable between the LNB and meter. If there is a strong signal present, it means the fault is elsewhere in the system, i.e., the coax or receiver unit.

If there is a weak signal, it may mean that either the LNB is faulty or the dish has become misaligned. Try moving the dish alignment according to your satellite networks instructions to see if the signal strength improves. Sometimes if the fixing bolts aren’t tight, strong winds can misalign your satellite dish.

Unfortunately, this isn’t a very accurate way of doing things. You’ll also need someone else to communicate strength readings to you while you move the dish to various positions. [A walkie-talkie can come in useful here].

Move the dish bit-by-bit until you get the best signal strength. Use the 3-axis of movement that the mounting bracket should give you, i.e., azimuth (side-to-side), elevation (up-down), and tilt (dish reflector rotation). You can usually verify the Azimuth, Elevation, and Tilt angles for your location by ZIP code – check your satellite providers website for details.

Some of the more premium mounting brackets will come with a built-in bubble/spirit level and graduated markings to assist with alignment. One of the most significant alignment issues can be traced back to the fact that the pole isn’t perfectly upright. I’ve seen several installations where people swear azimuth, elevation, etc. are spot on but the pole is either not vertical or bent!

If your TV reception has been gradually degrading over time, check the location and growth of any trees which may be restricting your signal reception. Similarly, check if any new buildings or cell towers have been erected nearby.

If you find a fault with the LNB, you’ll need to locate a suitable replacement. Sometimes proactively replacing your LNB for a higher quality component can be an excellent way to improve your TV signal. It can seem like a complicated endeavor; it’s not as complex as it may seem.

Almost anyone can switch out an LNB unit in minutes with just a socket wrench and a screwdriver. Upgrading your LNB is a good way to improve on the standardized LNB that comes by default with your satellite dish. In a lot of cases with the addition of 4K or SWiM technology introduced by DirecTV, you can keep your existing dish setup.

A lot of older satellite receiver boxes use dual LNB’s as standard so that you can record from one channel while watching another.  If you are replacing your LNB, it’s worth thinking about upgrading to a quad LNB or SWM to drive more than one receiver unit and distribute your TV viewing around the house. There are other ways of distributing TV signals around your home with multiswitches / splitters etc.

When looking to replace your LNB, there are several factors to consider. Noise, Gain, Microphonics Resistance, and Cross Polar Rejection. If you are going to go to the trouble of fitting a new LNB, you might also want to consider installing a satellite dish heater. Dish heaters are especially useful if you live in areas with a lot of snowfall in the winter.

The level of noise generated by an LNB degrades the signal and therefore, the picture quality displayed on your TV. If you are amplifying weak signals (from space) an undesirable side effect of that is the amplification of noise. You should aim to get an LNB that produces the least noise possible (LNB noise is measured in Kelvin). Typically, C band LNB’s tend to have the lowest noise temperature performance, and Ka band LNB’s have higher noise.

The gain is the amount by which the signal is amplified. It is feasible that gain can be too high and overload a receiver, but this is unlikely.

We’ve all had the irritation of satellite TV signal disappearing in bad weather. Wind / Rain etc. cause small disturbances in electrical performance of the LNB called microphonics. Severe wind vibrating the dish or rain hitting the LNB can add up to a total loss of signal if your LNB is susceptible. Unfortunately, there is no standard measurement for microphonics, making it challenging to compare LNB’s. Some groundwork on the manufacturer’s tech specs to find out the LNB’s ‘resistance’ to microphonics will is required before making a choice.

You also need to consider how many tuners your existing setup uses and make sure you obtain an LNB to suit.

Check out our recommendations for replacement DirecTV, DISH, and FTA LNB’s below.

It may seem a difficult choice when looking at everything that an LNB can do. It is not as hard as you may think. The key is to narrow the list  to what you need and then selecting the best piece of equipment for your price range. Most households will only need one or maybe two line outputs. That eliminates most of the LNB packages and makes it an easier choice. The opposite is also true for homes that know they are going to need three or four signals. Whatever your choice, you can save time and money by swapping this small component and potentially improve your signal.